The most interesting offices in the world - part 2. 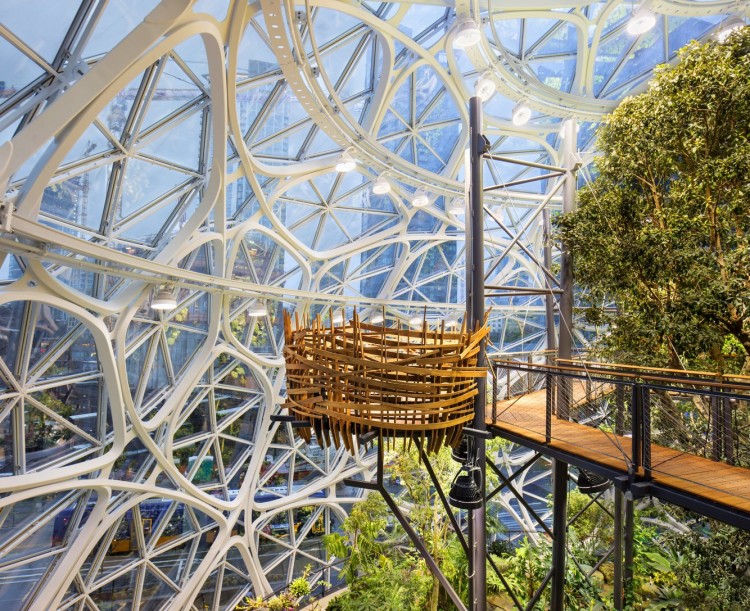 A few months ago, we presented the first list of the most interesting biophilic offices in the world, including the Google's headquarters in Zurich and the Adobe campus in San Jose. Today it's time for another (but certainly not the last) release of our series. We will visit four offices, from different corners of the globe, which have received a complete green fit-out. See how the companies selected by us have smuggled nature into the interior and get some inspiration.

The Amazon's headquarters in Seattle is much more than just an office complex - it's an entire estate designed for the company employees and associates, as well as the local community. In the central part of the estate, The Spheres is located - a facility that was put into use in 2018. 40,000 plants from 30 countries grow under three characteristic glass domes.

The best gardeners, designers and landscape architects have worked on meeting design challenges - from lighting issues to carefully concealing cables. The Spheres is nothing like a boring, sad workplace - it's a real rainforest enclosed in an office building. This microenvironment is beneficial to both vegetation and employees. Instead of enclosed conference rooms and claustrophobic offices, the building's users were offered friendly open space areas connected by a network of paths. Creative space is conducive to creative thinking, and living greenery facilitates relaxation and concentration.

One of the highlights of The Spheres is the green wall of live plants, over 18 metre high and containing over 200 different species, that stretches vertically through the four floors of the central dome. The largest specimen at the Amazon's headquarters is a forty-year-old 15-metre fig tree, affectionately named Rubi - it was brought from a Californian farm and then lowered into the sphere with the help of a crane. 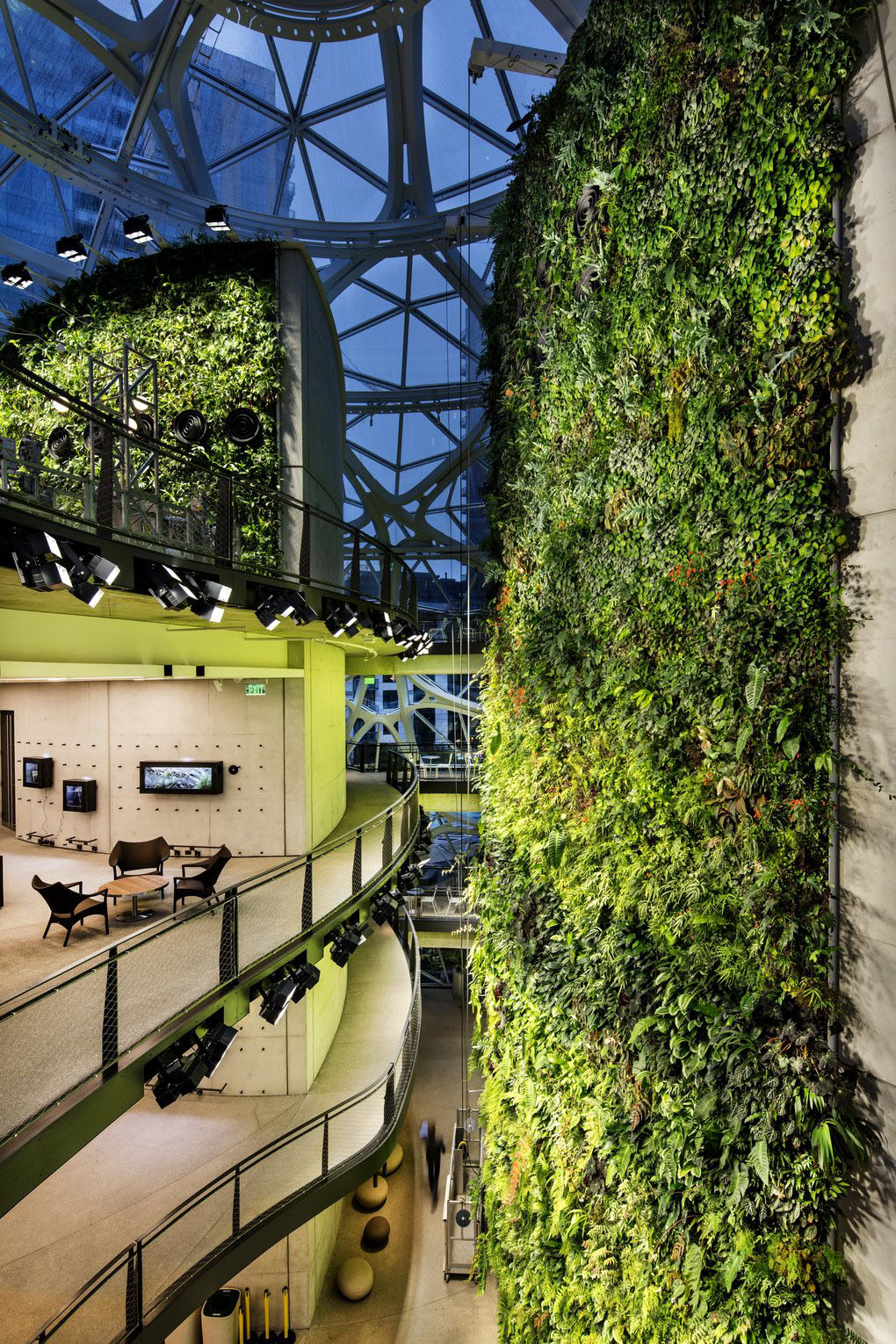 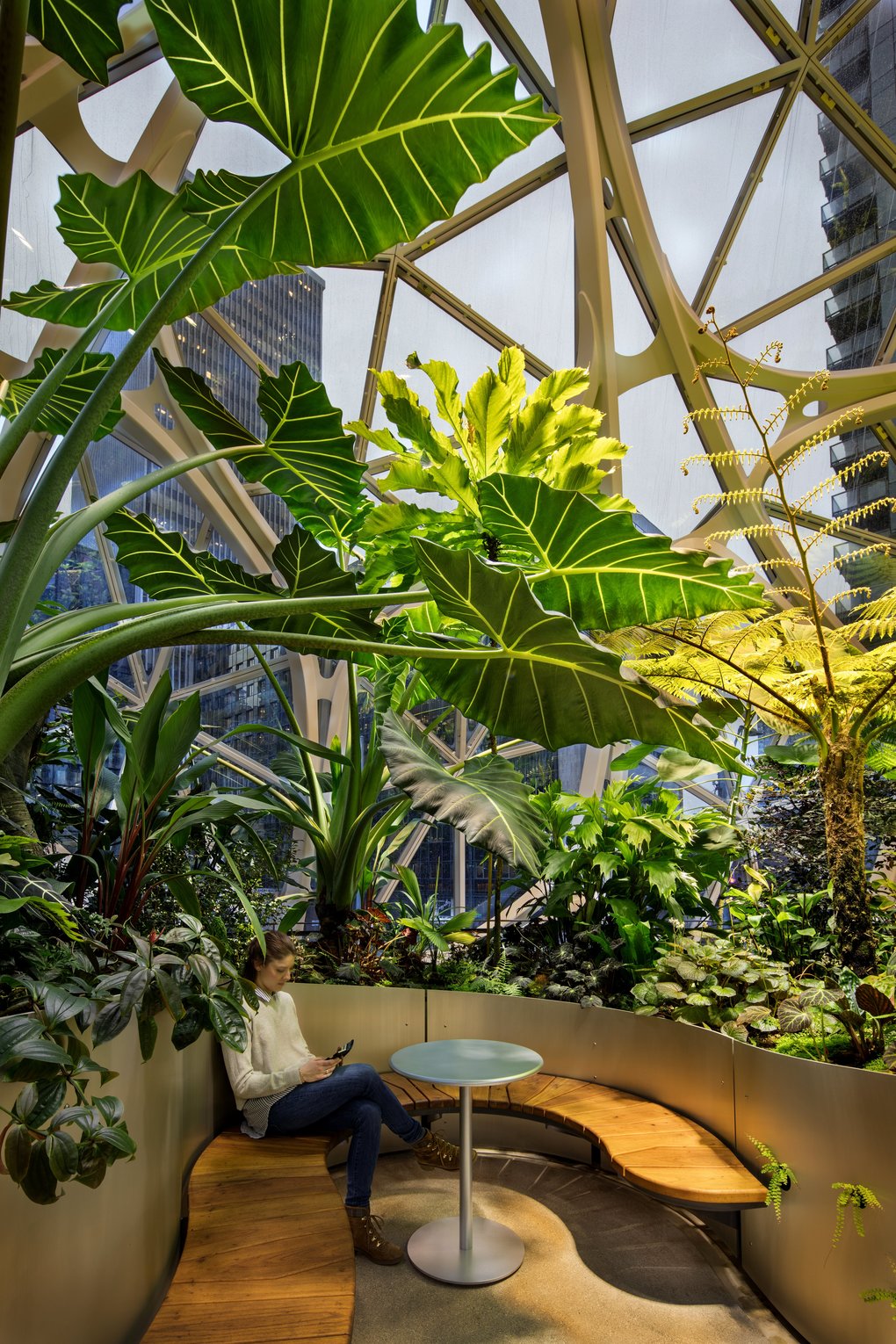 Microsoft certainly has one of the most amazing biophilic campuses in the world. In Redmond, in addition to the headquarters of the technology giant, unique conference rooms were launched in tree houses in 2017. Pete Nelson from Treehouse Masters is responsible for their design and execution.

The houses are designed in such a way as to adapt to the height of the trees. Since they are able to bend and expand, they should last at least 20 years. Microsoft decided to make such an investment to broaden the horizons of employees, improve their well-being as well as stimulate their creativity and productivity.

Employees have access to all modern office facilities - electricity, Wi-Fi or ergonomically designed seats. Hand-carved wood door can be opened with an access card. The interior is warmed by ubiquitous wood; everywhere one can smell the scent of cedar and see green tree crowns through the windows. By the way - there are over 20,000 of trees on the campus, and Redmond itself is situated in the very middle of the forest. 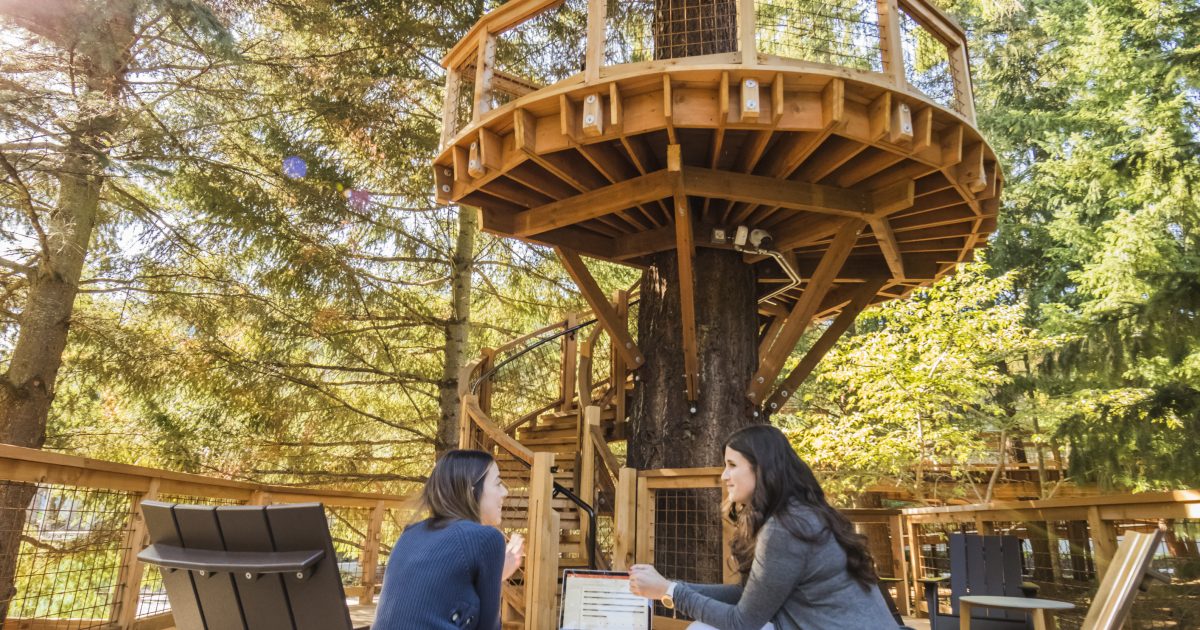 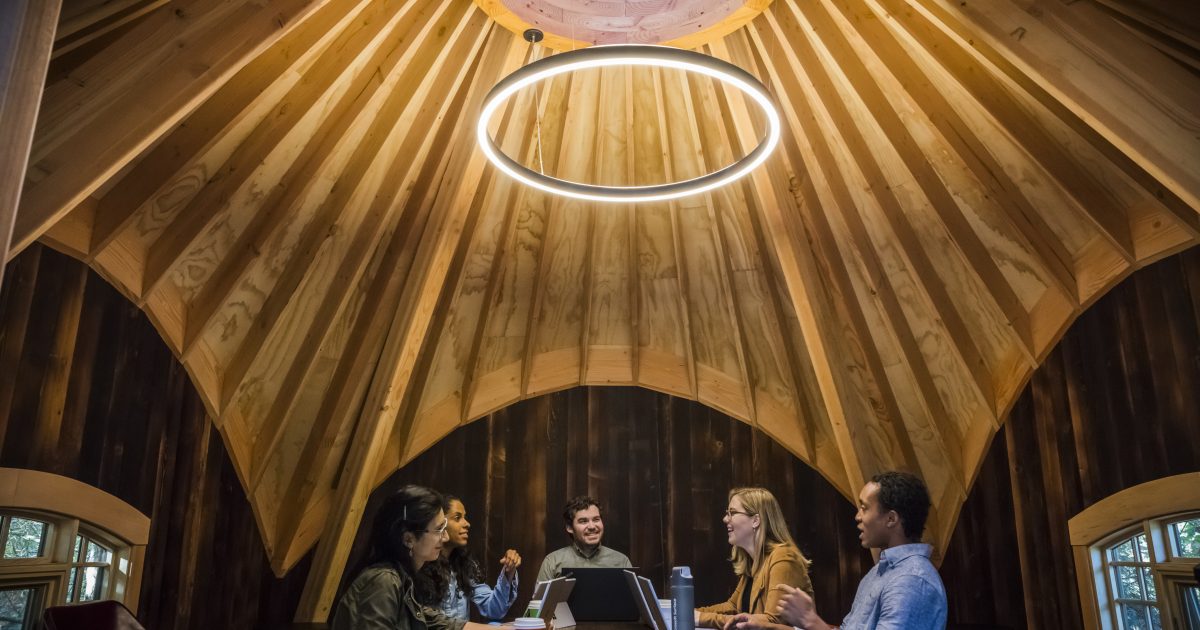 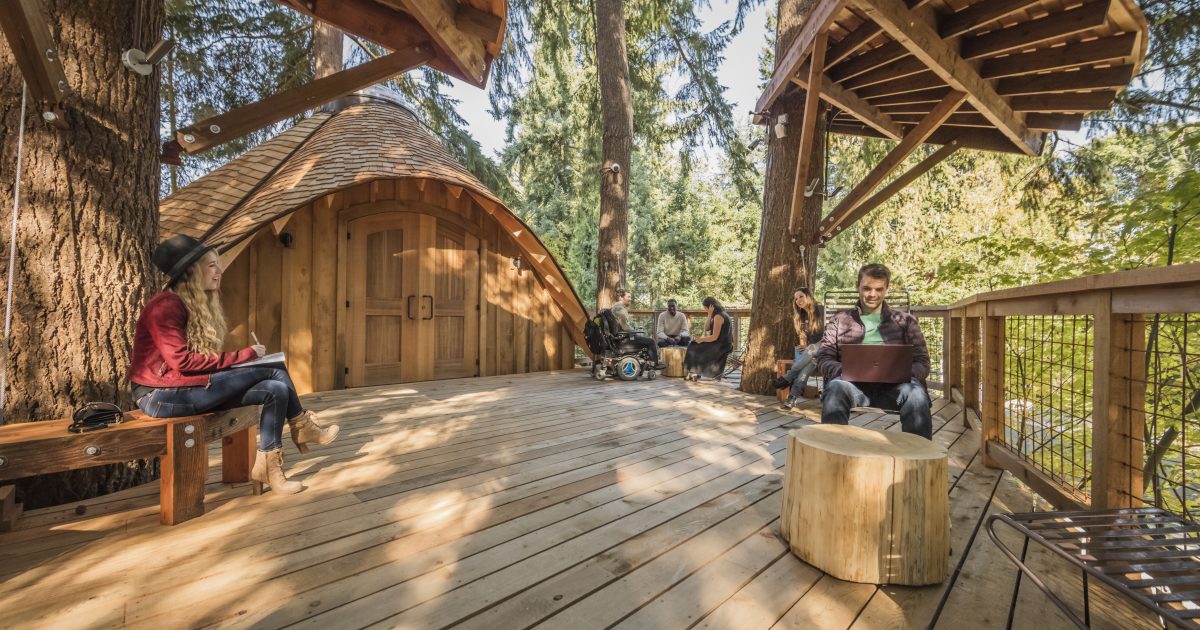 Working in the largest Russian bank requires flexibility - individually selected teams with a variable composition work on specific projects. The architectural challenge was so great that several companies, including the famous Swiss Evolution Design, influenced the shape of the Sberbank headquarters. What is the result? Multifunctional, flexible, diverse space, which covers conference rooms and coworking spaces, as well as enclosed individual boxes. Each of the four floors, that can accommodate approx. 650 people, is divided into zones of various purposes and colours. In the centre there is the main communication spot with a multifunctional conference room, a library, a kitchen and a relaxation area. Workplaces are located along the outer ring of the building, right next to the windows.

Of course, various forms of greenery could not be missing in such a modern office. Hence the presence of vertical gardens made of live plants, vertical moss walls, specimens planted in pots or trees growing out of round tables. In line with the concept of biophilia, we focused on natural materials and the maximum use of daylight; the photo wallpapers used refer consistently to the world of nature. The variety of available places for individual and group work motivates to change the workplace during the day. Such purposeful movement of employees stimulates their creativity and spontaneous exchange of information. 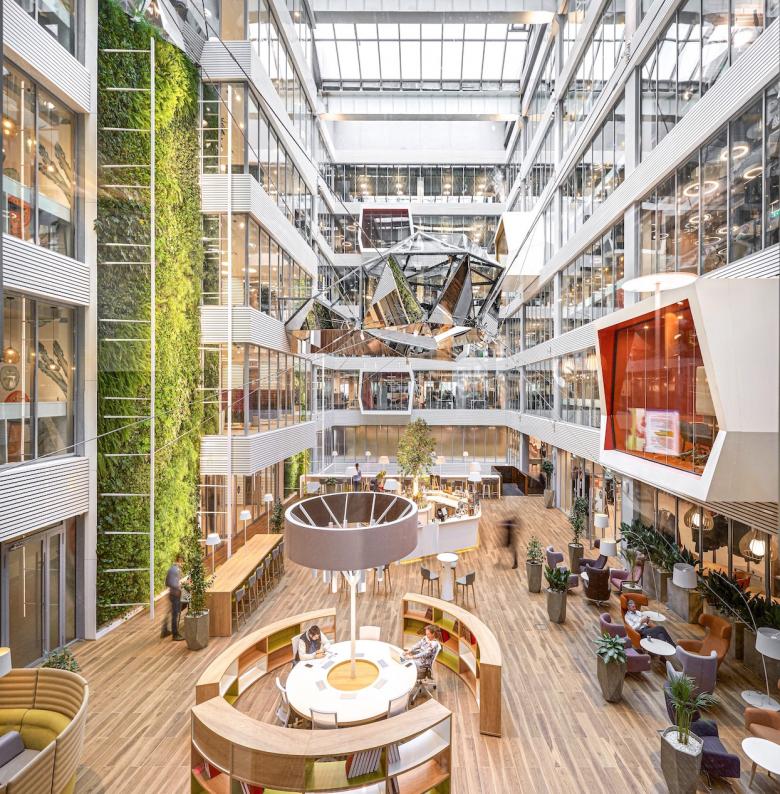 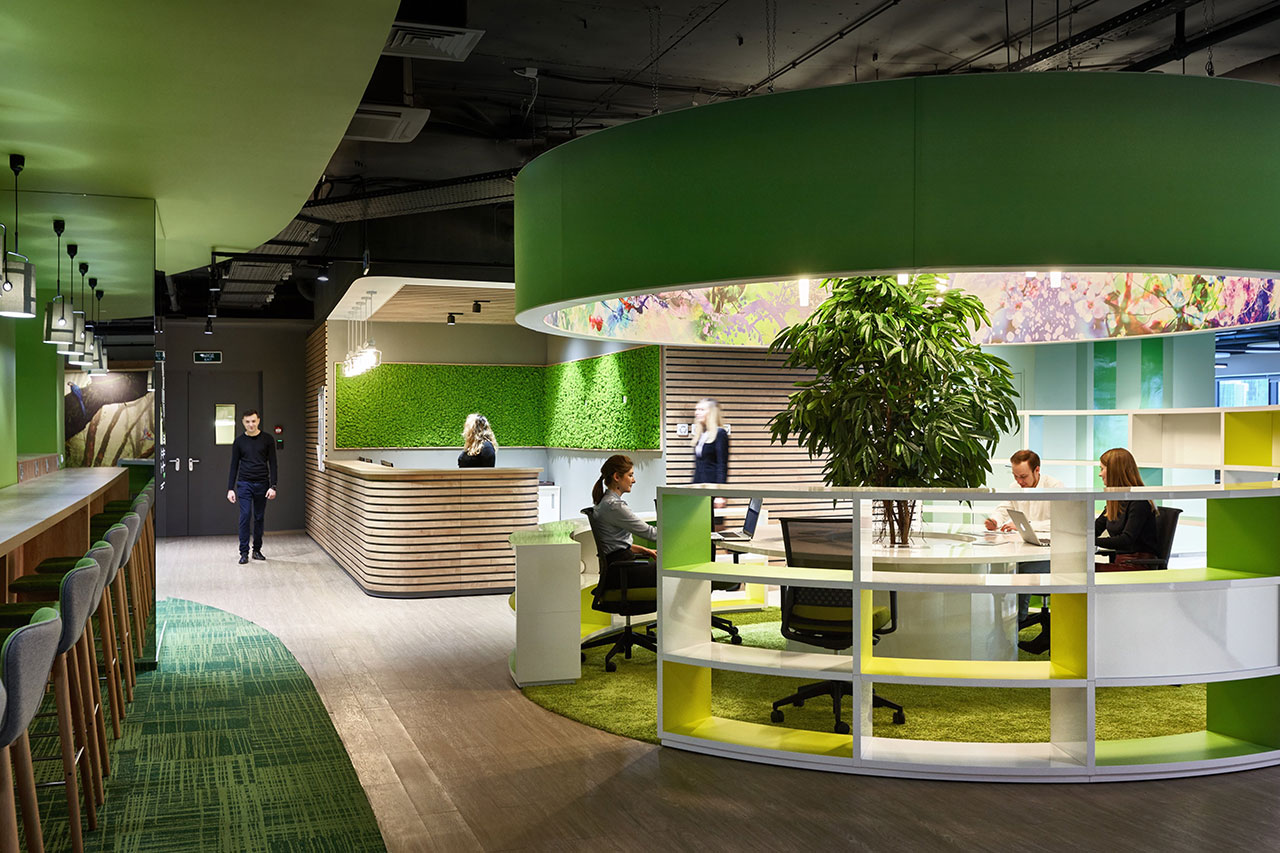 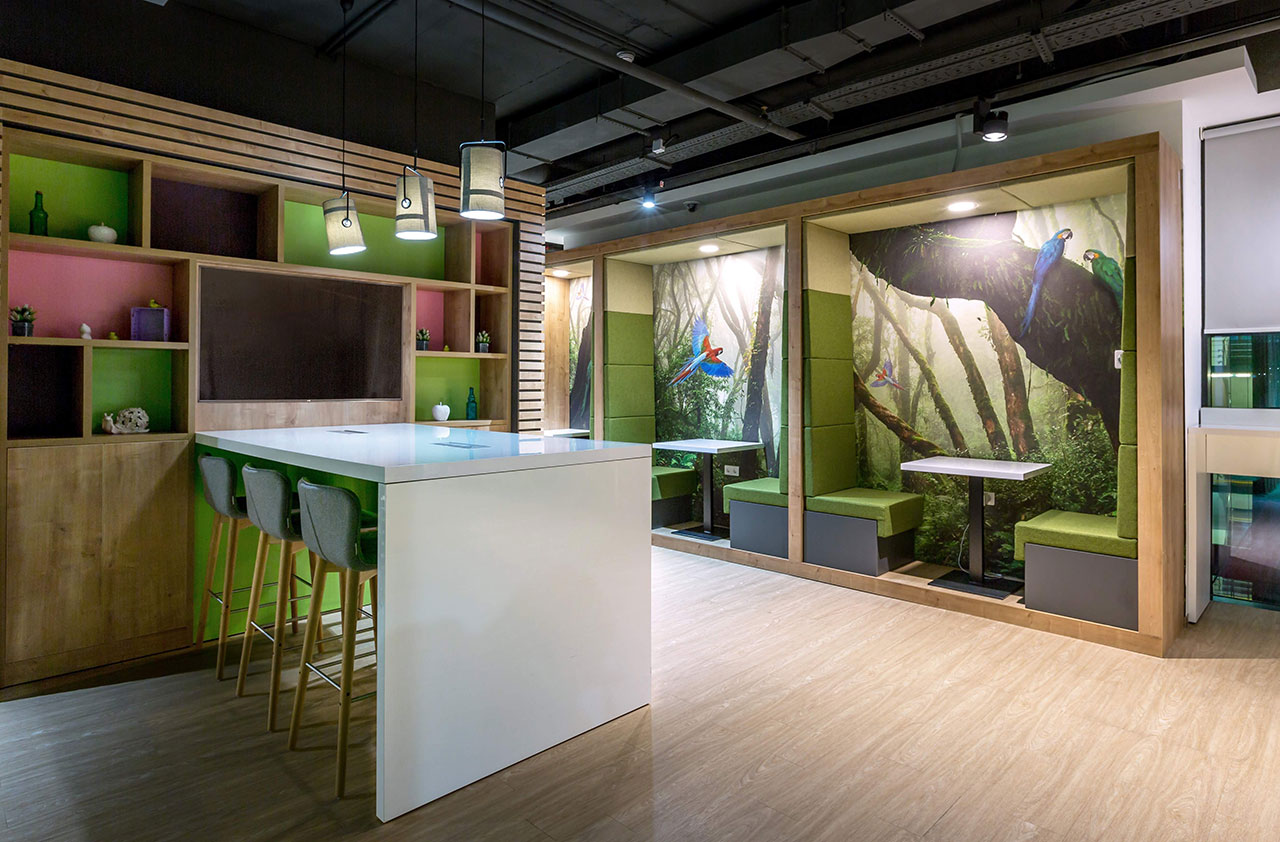 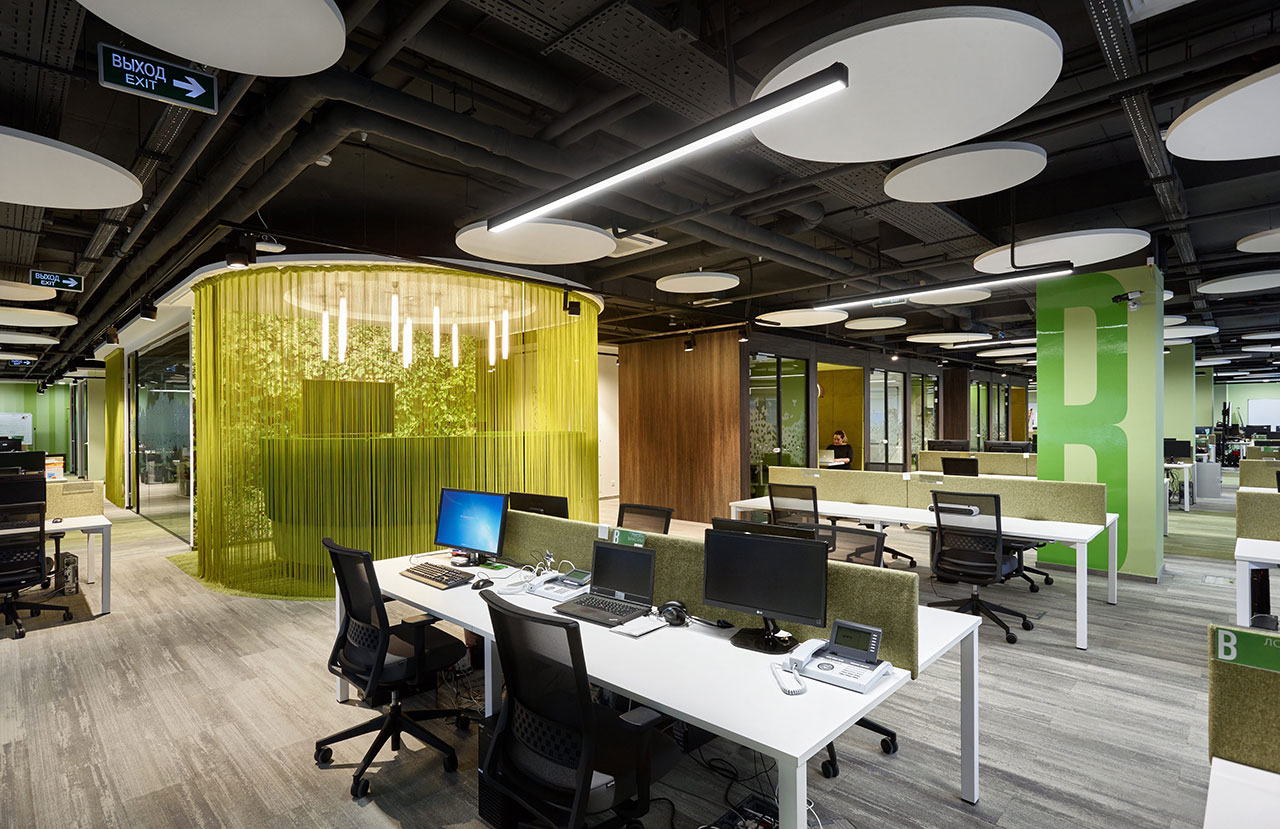 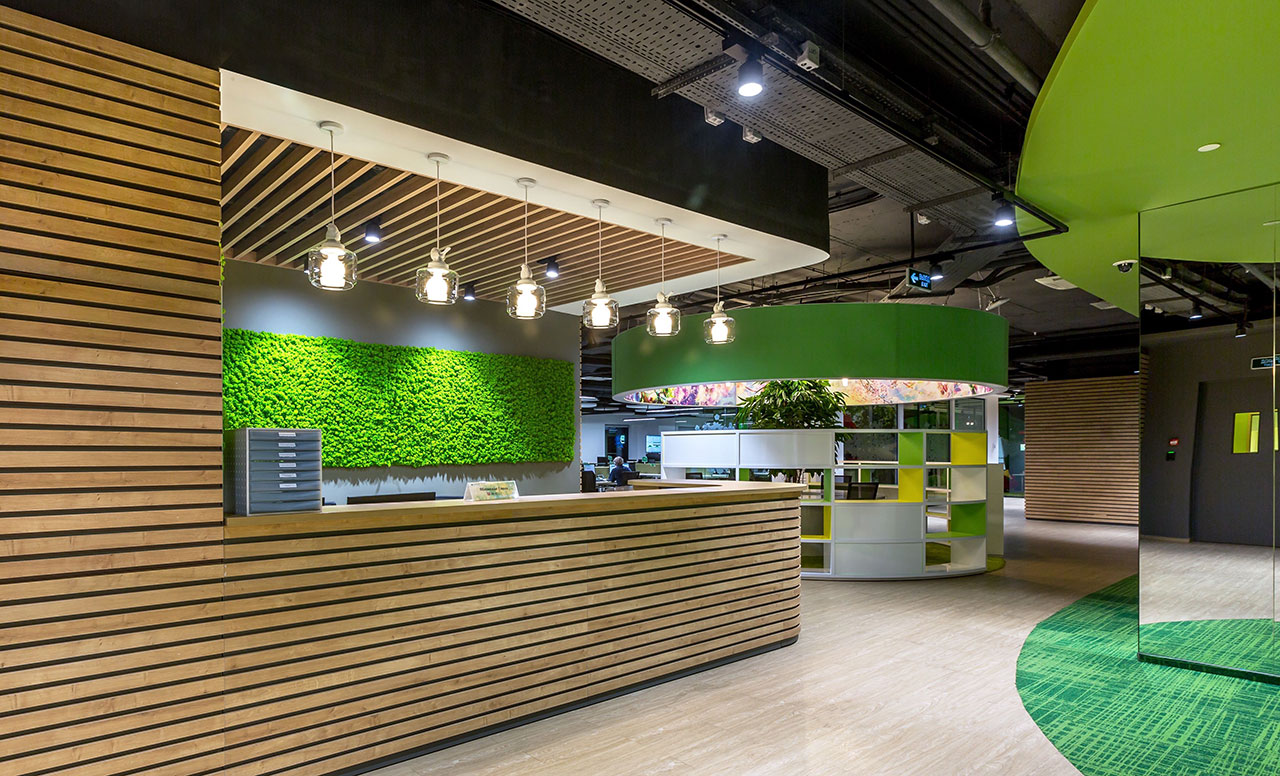 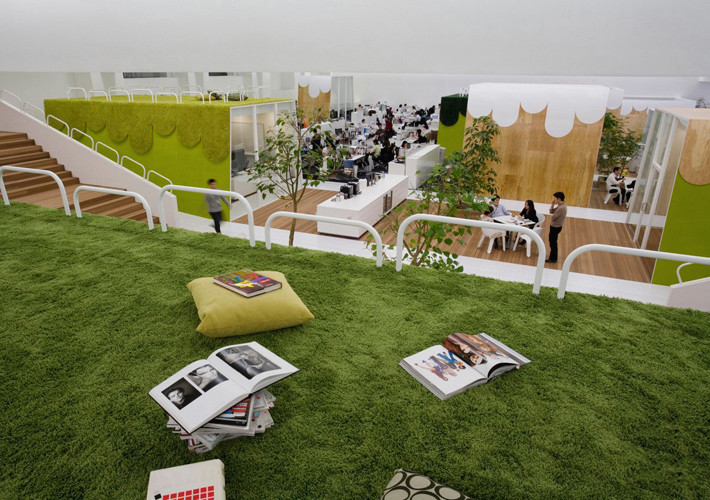 Although the office of the advertising giants was already established in 2007 (in cooperation with Hakuhodo Offices and KDa), the several-year project is still modern and fresh. All thanks to universal solutions and the timeless biophilic design. The creative space is located in an eight-floor entertainment complex in the centre of Tokyo; previously, there was a bowling alley. The architects used the original layout and double-height ceilings, arranging design and conference rooms, workstations and director's offices in the free space.

Separated, enclosed rooms emerge from the wooden floor like moss-covered hills. The architects tried to maintain a balance between the need for interaction and the need for privacy - they offered a balanced compromise, using nature for this purpose. Moss, wood and trees planted in the middle of the open space provide soothing presence of nature and contribute to a friendly, healthy atmosphere in the workplace. 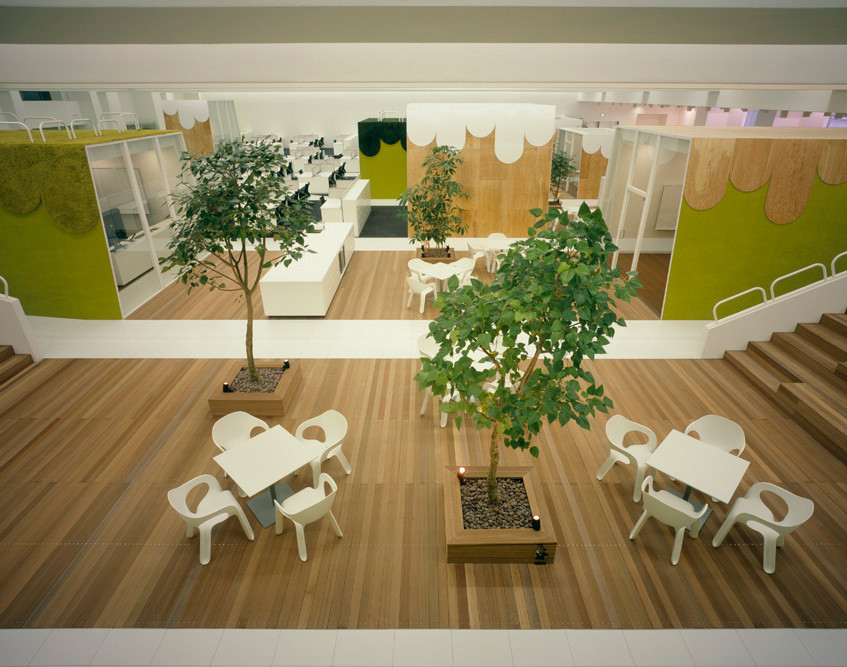 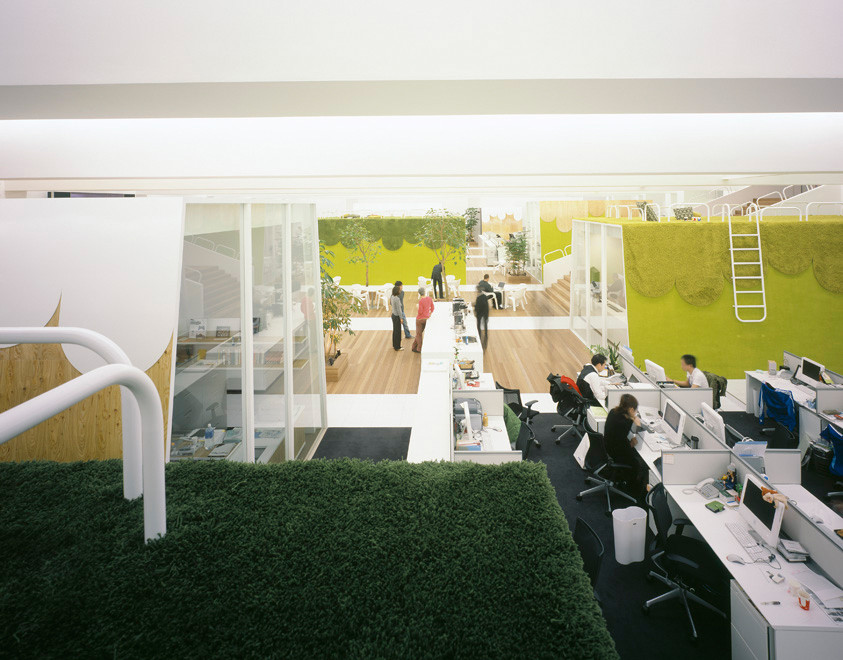 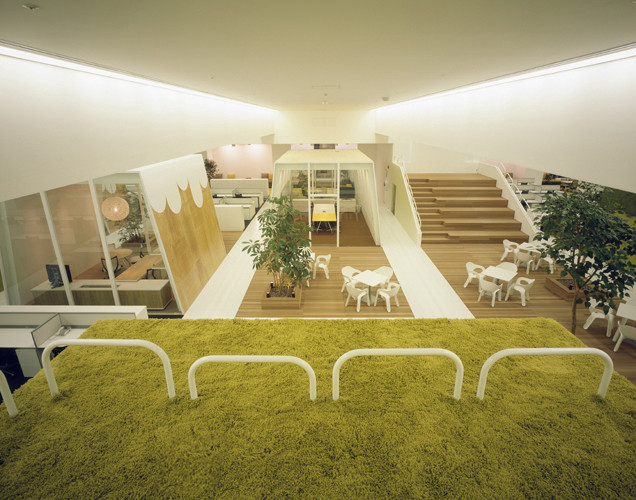