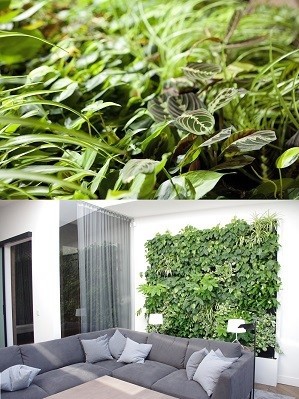 Without plants, life on Earth simply would not exist. No wonder that their presence at home or at work has a positive effect on our well-being and health. They remove numerous harmful substances given off by furniture, linings and devices used in offices (e.g. printers, photocopiers). By installing a green wall in an office or apartment, you do not only save space and bring in a garden, where potentially there is no space for it, but also provide adequate hydration and purification of the surrounding air.

What poisons us? In addition to exhaust fumes and smoke from furnaces, specific chemicals are also damaging to our health. Harmful formaldehyde is released from the glued wooden furniture. While wearing of carpets, during office machines operation and smoking cigarettes, benzene, ammonia, acetone or toluene are released... Plants help to purify the air by absorbing some of the so-called volatile substances along with oxygen and carbon dioxide. To this end they use stomata present in their leaves. We owe them improved air quality in the office or at home.

Fact: purification of air by plants confirmed by NASA

Probably the most famous scientific research on the impact of plants on chemical purity of the air was carried out by the National Aeronautics and Space Administration. NASA made an experiment in 1989, its results are quoted until today, and the project itself has been noted in the history of science as extremely influential.

The last two plants have turned out to be absolute record-breakers when it comes to detoxifying effects. Unfortunately, some of the above mentioned flowers, in addition to having cleansing properties, are also poisonous - they are perfect for a green wall in the office but it is necessary to be careful or even resign from them at home with children or animals.

Myth: just a few plants is enough to clean the air

This is of course not true! To notice the difference, it is worth equipping the apartment with as many plants as possible. Single plants will not do any miracles. NASA recommends placing at least one plant in a given space of 10 square metres; the realities, however, reveal that the rate of releasing harmful substances is higher than the rate of their neutralisation by too few plants. For greenery to be effective, there should be a lot of flowers. This is another argument proving that a vertical garden is such a good solution. In a small space, one can place a lot of plants (up to 25 pieces per one square metre) - it's not only taking care of the air, but also saving of valuable space. Just imagine what the situation would look like if we wanted to replace a wall with a size of 2 square metres with potted flowers. There should be as many as 60 of them...

When arranging a green wall to your home or office, the following plant species should be considered:

- peace lily - efficiently filters acetone, benzene, ammonia, alcohols and other harmful substances, including formaldehyde, xylene and trichlorethylene. In addition to releasing a lot of moisture, it is also ornamented with its green leaves and decorative flowers. In short: the air filter and aesthetic qualities in one!

- epipremnum aureum (rhaphidophora aurea) - looks beautiful when climbs up the green wall. It is worth to plant them where there are smokers - it perfectly absorbs not only formaldehyde, but also tobacco. In addition, it is easy to grow and maintain (just like ivy, which is also worth paying attention to when selecting species used in the vertical garden on the balcony or terrace),

- spider plant - perfectly copes with the purification of air from toxins such as aldehyde or xylene. In addition, it is beautiful and likes to grow, and its cultivation is not very complicated. It occurs in several varieties differing in the leaf colouration, and a few times a year it has decorative small white flowers.

- nephrolepis obliterata - unsurpassed when it comes to the rate of neutralising formaldehyde, at least among house plants. It also cleanses the atmosphere of other toxins, and at the same time releases moisture, produces a lot of oxygen and contributes to improvement of the microclimate, but requires a bit more of our attention because it is more gentle.

Myth: green wall is an antidote to any problems with air quality

Plants arranged in a vertical garden can be used to purify air from hazardous chemicals. However, they cannot ensure removal of all harmful components, including suspended dusts, which are the most dangerous component of smog. Therefore, it turns out that the green walls will not save us from smog - unless we create a leafy curtain on the windows, that would act as a filter isolating us from the street. It should also be noted that potted flowers do not have such high capacity  to neutralise all the toxins released by a smoker - besides planting the garden, it is also necessary to work in other areas.