Flowers for bedroom - which plants will be a perfect choice? 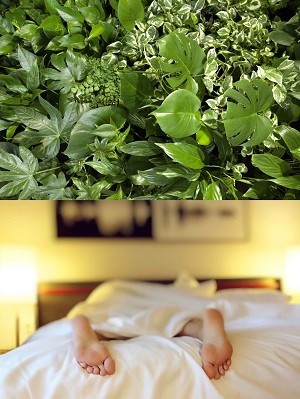 Perhaps you have come across a common opinion that placing flowers in the bedroom is not the best idea. Nothing could be more wrong! Below we deal with this myth and advise which potted plants are best to be placed in the bedroom. See for yourself that it will bring you only benefits and choose the species that will best suit your preferences!

Flowers will not kill you while you are asleep!?

The misconception that plants in the bedroom can be harmful to us, results from the exaggeration and distortion of the fact that at night flowers  take oxygen and release carbon dioxide. It would make it difficult to fall asleep, deteriorate the quality of sleep, and even cause shortness of breath. According to this, having plants in the bedroom would lead straight to death by suffocation. For such a scenario to happen, we would have to be in 100% hermetic rooms, and there should be really a lot of plants there. Of course, both scenarios are completely unlikely unless we would create truly laboratory conditions and change the bedroom walls into one large vertical garden.

Flowers do not have such a strong effect as it is considered. Contrary to popular belief, planting them in a place where we sleep is a very good idea - however, it is worth to carefully select plant species. Since there are potted flowers that are more suitable than others for placing in the bedroom. The whole secret lies in reverse photosynthesis - at night such plants produce oxygen and absorb carbon dioxide. In this way, they adapt to a dry hot climate, and at the same time oxygenate the room and - instead of making it worse - they improve the quality of our sleep.

Night oxygenation thanks to flowers

In addition to the fact that plants enrich and warm the interior of the bedroom - that is, affect its aesthetics - skillfully selected, significantly improve the air quality. A lot of plants:

- absorb harmful substances from tobacco smoke, varnishes and paints,
- reduce chemical poisoning,
- combat the growth of mould and spores,
- give a pleasant neutral smell,
- clean and moisturise the air,
- produce oxygen, that is, they also oxygenate the room and the body (this in turn helps to fall asleep faster and provides a healthy relaxing sleep).

Note: try to set single and not very impressive plants in the bedroom. Large specimens are suitable only for spacious rooms. Try to make nice atmosphere that will be conducive to night rest. What specific species can help you with this?

Plants that rel ease oxygen at night, with which it is worth sharing a bedroom

CO2 is absorbed and oxygen is released by, among others, candelabra aloe, schlumbergera, hatiora gaertneri, Guinean sansevier or orchid. Let's take a close look at these species:

- aloe vera - a succulent known for its medicinal properties. It has thick fleshy leaves, it likes the sun and high room temperature (only in the winter it feels best in approx. 10 degrees). Not only does it reduce the amount of pollution and moisturise the air but it is also characterised by reverse photosynthesis. It should be watered sparingly and also treated with potassium fertiliser.

- schlumbergera and hatiora gaertneri - Brazilian species that look significantly different from ordinary cacti. They have beautiful bright flowers. The first cactus blooms in winter, while the second - in summer. They look great on a bedroom window sill - they do not like frequent touching, transplanting and watering too much.

- sansevieria trifasciata - resistant and not very demanding plant. It can be set in a sunny, but also in a shady place; it will survive even a month without watering. It produces a lot of oxygen at night - it's no wonder that, acccording to specialists, it should be in every bedroom!

- orchid - epiphyte, does not like frequent transplanting and too much watering; However, it is worth spraying it every day. It blooms beautifully (its flowers form a long inflorescence), it is devoid of an irritating smell, and it will be the perfect choice in the bedroom.

Other flower spe cie s recommended i n the bedroom

Moisturising and cleaning the air in the room will be provided by, among others, papyrus, fern, ivy, spider plant, geranium, gerbera or dracaena. For the same reason, the peace lily is recommended for the bedroom. A plant with numerous white flowers and large shiny leaves absorbs, among others, alcohol, benzene and acetone. In summer, it must be watered more often than in winter. The peace lily is a leader in the rankings of plants perfect to be put next to the bed; however, it must be remembered that it is poisonous, so people having children or pets should be careful. A lot of these species can also be successfully grown in a vertical form - on a green wall.

What other species are worth to be considered when arranging a bedroom? Zamioculcas, rhododendron, tradescantia, cyclamen, begonia, asparagus densiflorus, hoya, hemigraphis, poinsettia, ficus, philodendron, chamaedorea elegans or anthurium will also have a positive effect on our health and well-being.