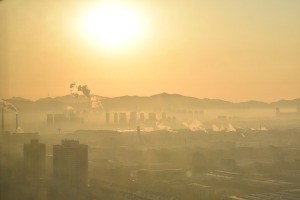 Smog is a word that arouses fear in a lot of Polish cities and towns, especially during the heating season. In recent years, the problem of polluted air and the effects of its inhalation are discussed louder and louder. Today, we do not need to convince anybody that on some days it is just better to stay at home. However, the question remains whether staying at home is safe enough for us. In other words: is the level of pollution in the interior harmless to humans? And if not - what can we do to reduce it and what can plants do with it?

The air condition is sometimes worse inside than outside

?The amount of pollution from exhaust gases produced by cars, factories and home furnaces is still growing. The worst quality of air can be observed where there is an accumulation of these problems, i.e. on crowded roads and in larger cities. However, observations about the air quality in our homes or offices are the most disturbing. A lot of people say that it's enough to close the windows to protect yourself from the harmful effects of smog. Nothing could be more wrong! The air in our interiors can be even several times worse than it is outside!

It is not only the fault of smog and ominous exhaust gases. Harmful substances are emitted by a lot of things stored in our apartments or offices - furniture, wallpape?r, paints, cleaning agents, interior decoration materials, and even everyday objects. We breathe in xylene, ammonia, benzene, trichloroethylene and formaldehyde without even knowing it. Meanwhile, each of these substances can have a negative impact on our health. Fortunately, there is a simple way to help purify the air that circulates in our interiors. Negative effects of smog and other harmful substances can be largely neutralised by plants. When surrounded with greenery, we gain the best allies in the fight against pollution!

A simple way to protect against smog and other contaminants

Do plants really have such power to help us fight harmful substances? Scientists have proven this a long time ago. In the 1960s it was proved that swamp plants are able to reduce water pollution. Almost all of us realise that forests have a very beneficial effect on the air quality. Scientists from NASA and a lot of research centres, including the University of Georgia, argue that there is a huge potential also in potted plants. There are species that can cope with mercury fumes, eliminate formaldehyde from the air and significantly reduce the ozone level in the room. As is known, ozone is a significant component of smog, while inhalation of polluted air can cause irritation, and in the long term, disease of the lungs and other organs.

Potted plants, such as those installed in green walls, not only provide a pleasant visual effect, but also make a real contribution to improving air quality. They improve well-being, stabilise temperature, increase air humidity and our efficiency. As you can see - the list of advantages is quite large.

Do you know that, according to WHO data, 92% of the human population lives in areas with exceeded air pollution standards? Smog is a bane of not only big cities but also villages. Poland is at the top of the infamous European ranking when it comes to the most threatened areas. The lion's share of the 50 cities affected by smog the most can be found here (as many as 33 items). Some species of trees and potted plants can be very helpful for us.

Owing to cooperation with the Research Institute of Horticulture in Skierniewice, we have chosen species for green walls that not only give a beautiful visual effect, but also help to purify the air.

??The best natural air purifiers include peace lily, spider plants, cissuses, dracaenas or ferns. ?Special attention should be paid to the peace lily - it not only protects against benzene, trichloroethylene, formaldehyde, ammonia, toluene and xylene but it also absorbs electromagnetic radiation. Spider plants and ferns are also very important allies in the fight against smog - they effectively absorb formaldehyde, toluene and xylene. Other valued anti-smog plants include ficus benjamina, sansevieria, chrysanthemum, epipremnum aureum, anthurium and ivy.

The right amount of plants is necessary so that their effect is the most effective. Some large specimens or several smaller ones are enough. Because finding space for so many plants, and then taking care of them may turn out to be quite problematic, building a plant wall will be the optimal solution. We not only save space in this way but also save time for the care.